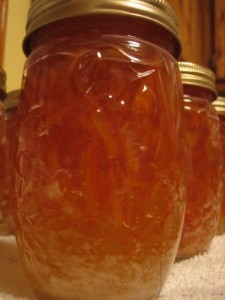 In 2006 I began a New Year tradition in my household: making orange marmalade from scratch, a process that’s fairly labor intensive but that results in some of the best marmalade that I and – to hear from my friends, neighbors and acquaintances who’ve gotten a jar – everyone else around me has ever had. No need to be humble about it I guess, since most of it is the work of Mother Nature.

It all started when a tree in my parent’s new garden suddenly bloomed one spring with an abundance of fragrant flowers, nearly a decade after they’d purchased the property. Whether the tree had been planted there deliberately by the previous owners or accidentally sprouted from a carelessly tossed seed we’ll never know, but my parents were delighted to see the blossoms turn into oranges over the course of the summer, fall and winter.

They weren’t so delighted when they actually tasted one.

The tree may very well be a Seville orange tree, famous for its fabulously sour fruit. Inedible out of hand, sour oranges are perfect for making traditional marmalade, so I picked a few armloads of fruit that first year and experimented at home with recipes found on the Internet. The tree itself has continued to produce fruit prodigiously and every year, when I return home to visit my parents for the holidays, we pick them all.

The fruit themselves are heavy. Really, really heavy. They look like ordinary oranges you’d find in the grocery store but the skins and pith are thick, the insides full of seeds and juice. They weigh nearly three times as much as you’d expect a normal orange to weigh. In fact, the fruit is so heavy that it bends most of the branches of the tree down to within easy reach. We all quickly learned, however, that the more fruit we picked, the lighter the branches got. Soon they’d lifted out of reach and we had to figure out how to get the rest of the oranges off the top of the tree. The second year we left almost half of the fruit unpicked simply because it was out of reach, even with the aid of a ladder.  Today it’s a quick and easy process involving a ladder, a pruning pole, shears and three people. Thick work gloves are necessary too because of the nasty thorns on the tree.

This year the yield was a little thin because of the drought and several freezes that diminished most of Dad’s citrus orchard, but last year the tree yielded nearly 145 pounds of oranges. 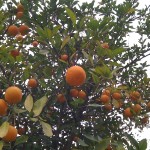 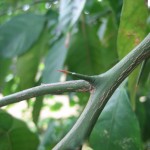 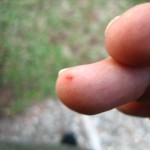 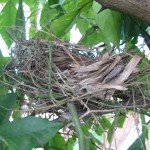 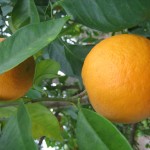 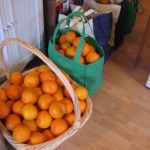 The New Year always starts out with a marmalade-making project of massive proportions that takes over my kitchen. It can take up to three months to complete and I’ve worn out at least one juicer in the process. The upside to this chaos is that the whole house smells of fragrant oranges until about March.

Despite being a novice at making marmalade, my first year was a success almost immediately — once I figured out how to get the slivers of peel just right.

The whole process begins with washing the oranges, then juicing and peeling them – in that order. Even though there are no pesticides of any kind, the oranges still manage to attract a fair amount of dirt (way up there in the tree, don’t ask me how) and need a good scrubbing before the peels can be used. I first soak the oranges to loosen the dirt, then use an antibacterial soap and scrub them, rinsing several times, before hand drying them with tea towels to keep them from going bad too quickly. With 145 pounds of oranges, just washing them took several days!

Next, I juiced them. Despite the thick peels and pith, the real weight of the oranges comes from an abundance of juice, so my puny little juicer gets a real workout. There’s a lot of pulp, pith, and seeds to toss as well as the occasional fruit that goes bad too quickly, so the trash fills up quickly with the remains of the innards of the oranges. Storage is also an issue, since the juice needs to be kept until the peels are prepared and ready to be cooked.

The really labor intensive part of the process comes next – preparing the peels. Frankly, this part took a couple of years of trial and error to get just right. Most folks suggest a sharp peeler to get thin pith-free slivers of peel off the oranges before they are juiced, but I didn’t really like the result: a somewhat tough candied peel. So I came up with a slightly more complex process that seems to result in a better end-product: once the fruit is juiced, I cut the emptied halves into half again and then slide a sharp knife along the flattened inside of the peel, scraping off most – but not quite all – of the pith. Kitchen sheers make quick work of the scraped peels after that. Obviously this takes a while to do and I’ve got to keep the peels moist or they’ll dry out and be hard to scrape and cut. I learned that juicing a few oranges and then preparing their peels right away worked best. The prepared peels also need to be kept in water and soaked and drained a couple of times to remove some of the bitterness. (Overnight for several nights worked best.) This method produces a slightly softer candied peel in the marmalade (especially when you add a pinch of baking soda later to the boiling water) with minimal bitterness and it leaves just enough of the pectin-containing pith intact for jelling the stuff properly with store-bought pectin. 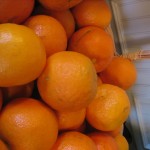 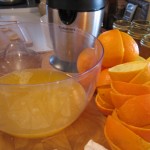 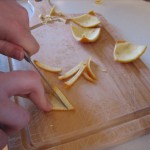 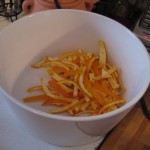 Eventually all the peels are done (whew) and the jelly making can begin. That’s the fun part and it goes really quickly. If I’ve got enough sugar and jars, I can usually get all the juice and peels made into marmalade in a single day!

First, I start by boiling the peels. This is to get any remaining bitterness out of them rather than to soften them. To soften the peels, I boil them just once with a bit of baking soda. I found less is more here, since boiling them too long or with too much baking soda can result in mushy peels. It’s an inexact process: I usually have to boil, taste, drain and boil again several couple of times before they have the right taste and texture.

Once the peels are cooked and ready, it’s time to start making the marmalade. Six cups of sugar (yes!), four cups of peels and two cups of juice – that’s the recipe. I combine all but the sugar with one box of pectin and bring it to a rolling boil in the largest pot I’ve got. Then I dump in all the sugar at once and bring that to another rolling boil. At this point the marmalade is something akin to lava, so caution is necessary to avoid any bad burns. I keep it boiling for exactly one minute, then start ladling the liquid and peels into jars. If I’ve got the right balance of fruit, pectin and sugar, it starts firming up right away. If not, the peels float to the top of the jar and it takes a week for the marmalade to semi-set. If it doesn’t set at all, I’ll just recook with another box of pectin and reseal the jars. The taste is a little different if I have to do that, so getting it right the first time is always best.

I skip the processing part, which is when you put the sealed jars back into a boiling water bath for a specified amount of time, but only because I don’t have enough space and or equipment to handle all the jars and because the marmalade keeps pretty well once sealed. Any jars whose lid doesn’t go “pop” to indicate a seal gets stuck in the fridge and used first. Besides, between friends and family the stuff disappears rather quickly.

Last year’s massive haul – nearly 145 pounds of oranges – was used for experimentation. Friends happily volunteered to taste-test from eight different batches to find the perfect one. While peel texture seems to be a personal thing, I did come across one recipe that was universally liked. I also found that the marmalade can be made fairly successfully with the artificial sweetener, Splenda (I wanted to make something my diabetic mother could have) although it came out less sweet, more tart, slightly bitter and very cloudy due to the cornstarch that is blended with the Splenda. I’ll probably experiment with this formula a bit more to get a clearer product (liquid Splenda maybe? Stevia?) and a sweet, less bitter one too.

The marmalade making didn’t end with the oranges. Dad also grows Meyer lemons which made a beautiful marmalade one year. Unfortunately the peels stayed a little tough, so it wasn’t as satisfying to use but, oh my, the jelly was fantastic. I’d be doing that again this year, with improved peel preparation, but the Meyer lemon trees were hit hard by this year’s weather and didn’t produce any fruit. Next year, I hope! 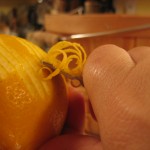 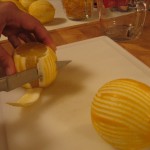 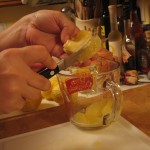 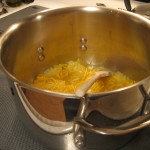 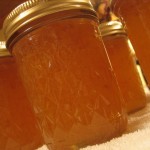 One thing I learned from all this? An effort like this requires a great deal of organization, but also a fair amount of patience and hard work. No wonder it’s usually retirees and nuns who make this from scratch.

One Reply to “Making Marmalade”